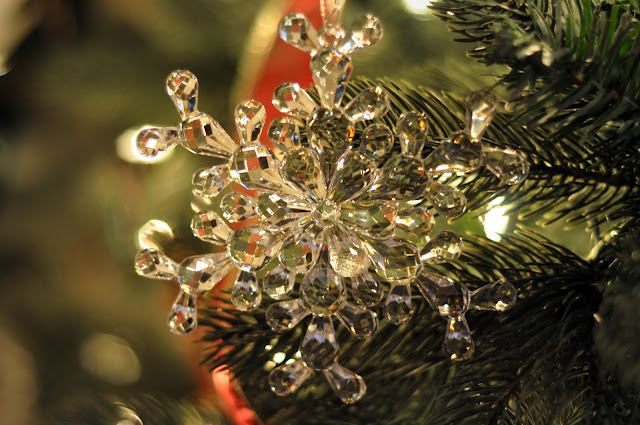 Twas the night before Friday, and all through the house, every creature was stirring and hacking in the house.

Fa la la la la. C-man and I are, as he describes it, "snuffly". My head feels like it's been cracked in between one of the nutcracker mouths that C-man so desperately wants for St. Nicks Day. (And by the way, who would have thought finding a real nutcracker would be so stinking hard? I think I'm going to have to go to the ballet store's holiday shop to get one from the Nutcracker Suite collection).  I am, at least, able to use the neti pot.  But since we're still teaching C-man the finer points of correctly blowing his nose, (seriously - why wouldn't someone just happily blow his nose? But nooooo, he'd rather disgustingly snuff it up 40,000 times.) I'm just applying and reapplying medication to his nose and face so it's not completely raw.  After we do simultaneous shots of cough syrup (affectionately renamed "Stevie" in the house) before we crawl into bed, we're both up hacking all night long, dragging through the day.  My whole body feels like it's been sledgehammered. I love not having an immune system. Good times had by all.

In other random tidbits, we took the van in this morning to see about getting the heater in it fixed. It's 18 degrees out and having frozen fingers when I arrive at work each day is not how I want to live. I really hate that minivan. Never again.

But the good news in the house is that Harry is back to normal.  He wasn't feeling himself on Monday, and the vet declared it a pinched nerve or tweaked back, and sent us home with some anti-inflammatories.  We're fairly confident he was right, because by yesterday, he was walking normally, requesting to play tug-of-war with the furry blue guy, and back to leaping in the air at the suggestion of a meal.

Another funny tidbit from C-man's school.  They were asked how to prepare the Thanksgiving meal.  This was his response:
First you get it from the store. Dad pays for the turkey. Dad roasts the turkey on the grill. No longer than 10 minutes on the grill at 5 degrees temperature. Bring it out and put it on a plate with grapes, yogurt, and cherries. You eat in the dining room. Dessert is chocolate chip cookies with chocolate milk. Then we lay on the couch and watch ‘How to train dragons’. My dad is a good chef. But my mom makes delicious chocolate milk.

It speaks volumes about our house, doesn't it?

In other good news, my Christmas cards are out. I love the whole idea of Christmas cards, so it's another one of those holiday traditions that makes me smile. I know it's not eco-friendly, but there's something so happy about receiving cards from people, some whom I don't talk to much throughout the year, in the mail each year.

And in the best news yet today, the real Texas Rangers made Chuck Norris an honorary lawman.  Seriously. Only in Texas.
at 9:42 AM

I hope you are both feeling better. Your blog and photos look AMAZING on my new widescreen monitor at work, wow! (I'm not at work now, but I checked it out yesterday. ;)